Check out their website here, or visit them at 1284 Missouri Street, just South of Potrero Hill, Monday-Friday between 9am-5pm.

We got a chance to interview DCL Productions’ owner, Christopher Long, in October 2018. Chris, what’s your story, and how did you start DCL Productions?

After losing an ice hockey scholarship at Northeastern University, I decided to start following a band called the Grateful Dead and sell printed t-shirts. It was a fun time, yet I was giving somebody else the lion’s share of the money from my sales.

While moving a screen-printing company from Vermont to San Francisco in August of 1991, I spent a week driving a U-Haul and brainstorming for a product that would complement the t-shirts I was selling on the Grateful Dead Tour. I wanted something that wasn’t being made yet, that I could wear at a concert or on a golf course. It wasn’t until the end of the trip when I was driving across the Bay Bridge that I saw my answer! I saw a guy wearing a Giants baseball hat and thought if I changed the S and F into a G and D using the same style letters I might be onto something. With $1000 and a sketch, I set out to make the first GD baseball hat. After many phone calls and more blind faith I sent a money order to a company outside of Boston. Three weeks later we had a file that could be sent to an embroidery house.

DCL Productions officially opened for business in October of 1991, in front of Madison Square Garden at the Penta Hotel. I had my 144 GD baseball caps and sold every one of them in less than an hour and made 4 times what I paid for them! Three days later, I had made 576 caps for the Boston Garden Shows and sold out after the first concert day. Game On!

Four years and a rehab stint later, I decided to move away from the East Coast to San Francisco to make a go of doing the embroidery myself. Who are some of your clients? Over the past 1 ½ year we have purchased and upgraded all of our aging embroidery machines. We also recently purchased a multi-head embroidery/chenille machine. We will be the only factory in Northern California with this capability!

The future continues to brighten as we invest in our employees, the technology and equipment. Why did you join SFMade?

SFMade found us. In fact, we embroidered the first SFMade cap. Once that happened, we were in. 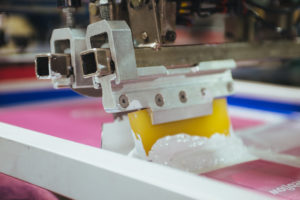